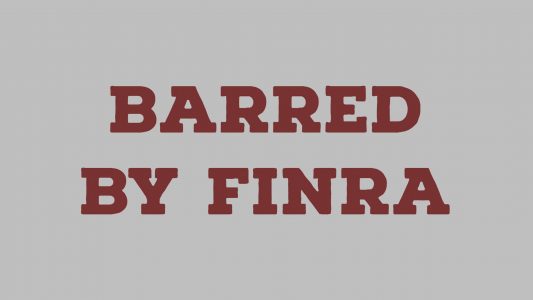 Previously, FINRA suspended Klabal on December 4, 2017 for alleged misconduct.  FINRA said it permanently barred Klabal after he failed to request FINRA terminate his suspension within the time frame required by FINRA rules.

Klabal’s suspension and bar were proceeded by several FINRA arbitration claims filed against him between March 2001 and December 2016, according to FINRA records.  The claims were filed on behalf of customers and alleged Klabal caused the customers’ losses through misconduct that included churning, misrepresenting information, fraud, breach of fiduciary duty, and negligence.

Eight of the claims settled, resulting in customers receiving partial recoveries of their claimed losses, with the largest paying $85,000 of $100,000 of damages requested.  Another claim was closed with no action.  Following a hearing, an arbitration panel awarded damages in one claim.  A claim filed in December 2016 alleging $200,000 in losses is pending resolution.

At least seven of the claims alleged churning.  Generally, brokerage firms charge fees on each trade placed for their customers.  Churning occurs when a broker intentionally recommends or places excessive volumes of trades in a customer’s account in order to generate large transactional fees for the broker and their firm.  This fraud can cause investors significant losses.

According to FINRA records, the churning claims filed against Klabal to date alleged that the misconduct occurred while he worked for Legend.  However, Marquardt Law Office LLC previously reported that three other Alexander Capital Brokers were charged by the Securities and Exchange Commission for alleged churning: Rocco Roveccio and William Gennity, who have pending charges, and Laurence Michael Torres, who was barred by the SEC after he settled his charges.

If you have questions about losses or large fees or commissions you suffered while investing with Jason Klabal, contact Marquardt Law Office LLC at (312) 945-6065 to speak with a securities attorney and receive a free case evaluation.  You may be entitled to recover your losses.