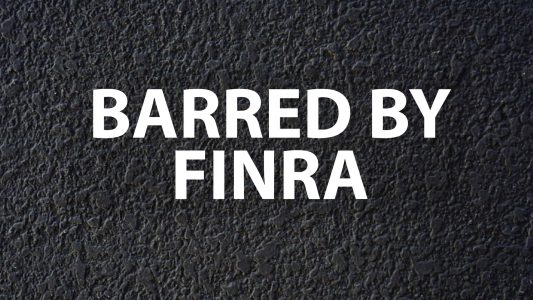 FINRA reported David Barber’s bar in its Letter of Acceptance, Waiver and Consent (“AWC”) that Barber signed.  The AWC states Barber was barred for failing to cooperate with FINRA’s investigation into whether he placed unauthorized trades in his customers’ accounts, exercised discretion on behalf of his customers without written authority to do so, or otherwise violated FINRA’s rules.

According to FINRA records, in May 2016 a customer had filed an arbitration complaint against David Barber alleging that he had caused the customer losses through excessive and unauthorized trades and that Madison Avenue Securities had failed to supervise Barber’s conduct.  The customer claimed the alleged misconduct occurred from March 2015 through February 2016.  In January 2018, a FINRA arbitration panel awarded the customer $2,186,492 in damages.

In September 2011, Raymond James reported to FINRA that it had terminated David Barber after investigating client allegations he misappropriated funds and the firm concluded Barber had violated firm policies about outside activities and selling away.  InvestmentNews reported Madison Avenue Securities had fired Barber in January 2018 following the arbitration award against them.

Unauthorized and Excessive Trading and Churning

Rules and regulations require brokers, like David Barber, to obtain express written authority from their customers before making decisions to place trades in the customers’ accounts.  Moreover, brokers are prohibited from placing excessive trades in customer’s account.  Brokers who excessively trade or churn an account have breached their fiduciary duty.  They may be found liable for trading losses and excessive fees and commissions caused by such misconduct.

Further, brokerage firms, like Madison Avenue Securities, have a duty to closely monitor and supervise their brokers’ conduct to ensure they follow securities rules and regulations, including by not excessively trading.  This duty is heightened when a broker makes decisions on behalf of a customer, even if the broker was not properly granted such authority.

When brokers and firms breach these duties owed to their customers, customers have a right to pursue claims to recover their losses caused by such misconduct.  If you have financial losses with David Barber, contact Marquardt Law Office LLC to speak with a securities attorney and receive a free consultation about your recovery options.

Marquardt Law Office LLC is a securities law firm located in Chicago, IL representing clients nationwide who have suffered losses due to misconduct such as fraud and negligence.